The Garden City Fire Department, which will celebrate its 95th year in 2015, is unique in that its operations commenced as part of a real estate promotion. With the sale of each parcel of real estate, founder Alexander T. Stewart and his successor, The Garden City Company, contracted to provide essential services, including fire.

The employees of the Company all doubled as firemen when necessary, even though they might be employed as clerks or gardeners. Equipment consisted of only a couple of hand-drawn hose reels and a ladder rig. 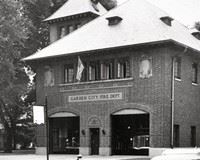 Today, the Garden City Fire Department, with its dual mission of fire prevention and firefighting, provides a vital service ensuring the safety and security of the lives and property of Village residents.

Firefighting equipment has evolved over the years. In 1924, the Fire Department added a new ladder truck and a 600-gallon-per-minute pumper. By 1927, the Village purchased a chemical truck. In 1939, the first 75-foot hydraulic ladder on Long Island was placed in service and was replaced in 1958 with a 100-foot hydraulic ladder truck. Presently, a fleet of modern firefighting vehicles with a full range of equipment is housed at all three fire stations located strategically throughout Garden City.

Since the beginning, when 31 local residents became "charter" members, over 450 local men and women have served in the ranks of the Volunteer Fire Service in Garden City. Residents are always welcome to join the ranks as it is the highest form of "community service".